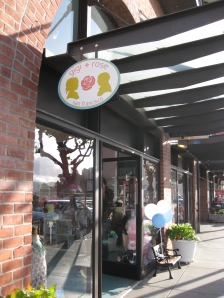 It’s always encouraging in this economy when I see a store opening, as opposed to closing, especially when it’s owned by a local. So when I was invited last night to attend the opening party for designer Kristina de Pizzol’s boutique, Gigi and Rose, in Ghirardelli Square, I was more than happy to drop by for a peek. 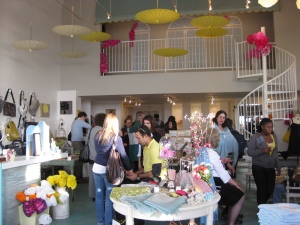 With a shabby chic French vibe accented by whimsical childlike decor (think giant pink lollipops,  umbrellas hanging from the ceiling, and apothecary jars filled with candies), the store’s interior could best be described as Anthropologie meets Juicy Couture. Named after the designer’s two young daughters, Gigi and Rose is stocked with women’s wear, children’s clothing, and home accessories, making it an ideal place to shop for a girlfriend’s bridal shower or your niece’s fifth birthday.

Pizzol’s name might sound familiar for those of you who follow the going’s on in the San Francisco fashion circuit. Her original store, Delilah Crown, also the name of her vintage-inspired clothing line, was formerly located in North Beach on Green Street. She decided to open the new store in an effort to focus her business less on wholesale and more on retail, she says.

Worth checking out on the fashion front are the large selection of handcrafted laser-cut jewelry by San Francisco designer Molly M. Designs and Seattle-based brand Suzabelle‘s new spring/summer collection of simple, silky sheaths.