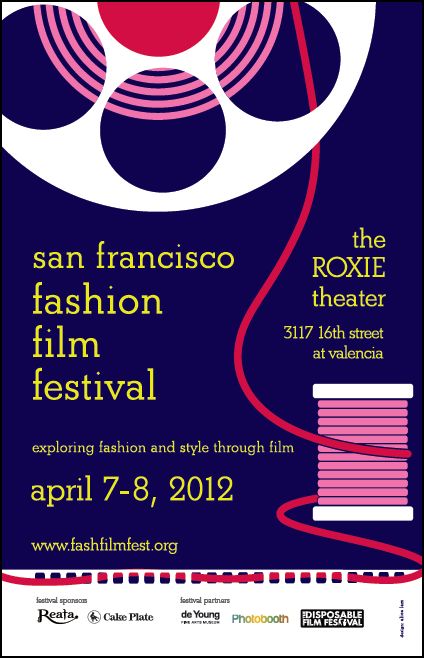 Presenting eight feature-length films, eight documentary shorts and 14 fashion shorts submitted by filmmakers from Amsterdam, The Netherlands and London, United Kingdom, the local event kicks off with a complimentary screening of Jacques Becker’s Falbalas, in conjunction with the exhibit The Fashion World of Jean Paul Gaultier: From the Sidewalk to the Catwalk at the de Young Museum on April 8. The rest of the screenings take place in the Mission’s Roxy Theater.

Here’s the scoop—straight from the fashion-obsessed co-founders—on how the festival came to be, their personal picks, and other surprising highlights from the stellar line-up.

How/why did you come up with the idea for the Fashion Film Fest?

Adelle: “I wanted to start doing more creative work, and after listening to Annie and Kim talk about Style Cinema, the idea for a film festival popped into her head. Annie had hosted some cafe screenings a few years ago under StyleCinemaSF. She and Kim had discussed reviving the series in a new location, just at the time when I mentioned doing a full-scale film festival. It was perfect timing!”

If you had to pick just one film from the line-up as your favorite, which one would it be and why?

Adelle: “This is a tough question. I’m excited about Ziegfeld Girl, our ‘Tailoring the Man’ block, and God Save My Shoes; but to pick one at this very moment, I would say Miss Representation. It offers an important perspective and counterpoint to the usual discourse in the world of fashion. I do believe that fashion is fun, and has an important place in both culture and industry, but there are negative implications. It’s important to consider them as well.”

Annie: “For me, it’s the menswear block we put together called ‘Tailoring the Man.’ I absolutely love Chris Floyd‘s documentary shorts called How I Get Dressed. I think he captured a portrait of stylish modern men that is so matter-of-fact and simple, showing men at their most vulnerable and personal. It’s pretty incredible work, and I’m not just saying that because the men are good-looking. (They are!) Pairing these shorts with the documentary Jack Taylor of Beverly Hills just makes perfect sense. The resurgence of bespoke in contemporary menswear owes everything to artisans like Jack Taylor. He is a living legend and his story needs to be shared again and again.”

Kim: “I would have to say The Matrix is my favorite. When it came out, it was so revolutionary, from the special effects to the story to the costumes. Sci-fi movies tend to have fashion that can border on campiness; The Matrix took things already in the fashion vernacular—slim black suits, trench coats, capes—and turned them into armor. Then fashion designers took those cues and made fashion that was armor for the real world, like some of Nicolas Ghesquiere‘s collections for Balenciaga, Hedi Slimane‘s tough trenches for Dior Homme or the minimal paneled leather jackets and bias cut long sweep skirts of Rick Owens.”

Do you think any of the films included in the line-up might come as a surprise to audiences as being influence in fashion? And what might audiences learn from that title?

Adelle: “For people who aren’t familiar with classic films, Ziegfeld Girl might be a surprise. I was surprised both by how much I liked it, and by how I actually recognized contemporary fashion themes played out in a movie from the 1940s. Four words: the Victoria’s Secret Fashion Show. If you come to the screening you’ll know what I mean.”

Annie: “I think that Ziegfeld Girl holds the most surprise as a film that was influential to fashion designers and costumers. Designers from Bob Mackie and Bill Blass to Valentino love this film and were influenced by Adrian’s over-the-top costumes. The Ziegfeld Follies that are portrayed and the fantastical costumes that made the Follies famous are totally foreign to modern eyes (even in Las Vegas or on Broadway), and it requires a certain suspension of disbelief. But, this film is irresistible; once the credits roll, you’re hooked and totally absorbed by the romance and fantasy. Bring on the feathers and pom-poms!”

Kim: “I definitely think the sci-fi choices may be a surprise to some, mainly because of the quirkiness that those movies tend to have. Barbarella is certainly not a serious look at the future, but it introduced the idea of a strong female heroine, which then evolved into the role of Trinity in The Matrix. Both movies had far-reaching impact on the world of fashion by either inspiring designers or inspiring women to take more risks with or have more confidence in their fashion choices.”